A downloadable game for Windows, macOS, and Linux

A lesbian exploring a post-apocalyptic world with a remote-controlled rover, trying to rescue other survivors and find some love.

This game is still at prototype stage!  All feedback is welcome so that I can make the final game as good as possible.

It is ten years since the Cobalt Rain. Life on the surface is rendered impossible due to toxic cobalt fallout. Melody Bell has been hiding deep underground all those years, alone, but alive. However, she might not be alone much longer.

It turns out that another girl, Harper Reed, has survived the Cobalt Rain too. However, she won't be able to survive much longer on her own, and as she seems like a nice girl, Melody would really like to rescue her.

Thus, Melody sends a remote-controlled rover outside to explore the Cobalt Mist, in an attempt to find a way to bring Harper to safety.

This is a super coarse demo made in two weeks for Rainbow Jam 2018. If people like the idea, I might try to kickstart a full version of the game, with multiple romance interests, more content and game mechanics and properly polished everything.

You know... This is probably never gonna go anywhere, but... I'm a sucker for postapocalyptic scenarios, and this could be a pretty good one!

The idea that you'd be sitting in your radiation-shielded bunker underground, searching for that other (lovable?) survivor using a remote-controlled rover on a toxic, irradiated surface? Yep, that's pretty atmospheric alright. Clearly, this demo doesn't do too much, it's like just the initial dialogue plus a rough presentation of the rover's controls in 3D?

But still, this is... very promising! I just think that the way I'm imagining a game like this.. it'd be a ton of work that'd be at least a few 10k€ heavy in terms of man(girl?)-hours.

If you would kickstart this, I'd be in though, maybe at about 30-50€ or so. Just saying. Because the basic concept is truly promising.

PS.: Why the hell is somebody like ME the first person writing a comment here? There's something wrong with this world... ;)

I too still like the premise and the mood a lot, and it's still a game that I'd like to make. However, in terms of genre and gameplay, it would probably be even more risky than Rose Seed Replica was, so it'll have to wait until I'm better off financially.

Edit: Oh, and it's actually a bit more than the intro text too, but so far I have only ever heard of one player who played it long enough to find the upgrades and see the extra bits of dialogue. But, yeah, it's still not much more than the intro, I guess.

What do you think, how much of a budget would be required to build this game? I mean, it has 3D graphics and all, so to do this properly (with green, toxic mist, ruins and trash lying around or something) would likely be a looot of work?

It would be interesting to hear what your estimates would be.

I don't know for sure since I never wrote an extensive enough design document for the game. If I had to give a wild guess, I'd say it'd be maybe 2 years worth of work if done the way I originally planned, with multiple romances, more gameplay, nice graphics and everything. Perhaps it'd be possible to make a more lite version in a shorter time, but I don't really know what it'd look like. 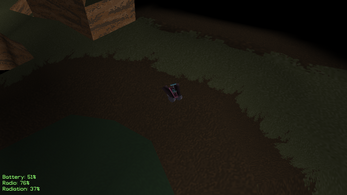 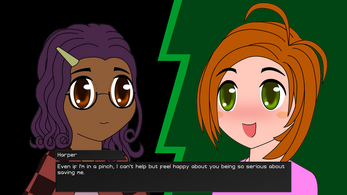 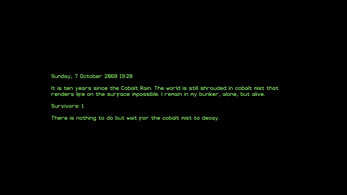 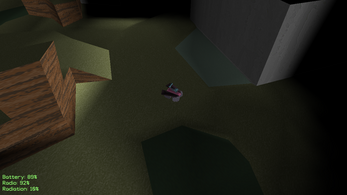